Walkden gardens take their name from Harry Walkden who lived in the detached red brick house called ‘The Raft’ which you can see today adjacent to the gardens on Derbyshire Rd.  He owned and ran a plant nursery ‘Moorside Nurseries’ on the present site and the land passed to Sale Borough Council on his death in 1949 with the wish that the land be used for the public good; preferably laid out as a park, pleasure ground or botanical gardens.

The Walkdens must have known a good piece of land when they saw it, as the land was fertile (previously moorland) and being a sandy loam, was a very free draining and easy to dig soil. There is also evidence that there were ponds and certainly a well in what is now the ‘Field of Hope’. The percentage of sand and silt in the soil (presumably brought here by the river Mersey) was so high that instead of building their house upon standard foundations, the wise old Walkdens built their house upon ‘raft foundations’ which better distributed the weight of the house and contributed to the house name.It is also believed that the town of Sale actually derived its name from Salix – the Latin name for willow. Willows would certainly be found growing in and around the silty marshy ground besides the river Mersey.The gardens were laid out on a phased annual basis by a Mr. Louis Bell (then Deputy Parks Superintendent for Sale Borough Council, later Director of Leisure Services for Trafford MBC) his annual budget was £1000 and construction was done ‘in house’ by parks personnel in between other jobs.

The gardens, a little over 5 acres were inspired by the famous 20th century garden at Hidcote Manor in Gloucestershire; there are many similarities.Long alleys with vistas, a series of smaller garden ‘rooms’ (some originally intended for individual plant species) and the unique and beautifully proportioned Theatre Lawn – a large enclosed space that can seat up to 500 people, but perhaps better appreciated when you are alone, are all surrounded by tall beech hedges.

It is interesting to note that within months of the gardens finally opening to the public, a proposal was put forward to demolish them in order to extend the grounds of what was then Sale Girls Grammar School. There was great public outcry and the ‘Friends of Walkden Gardens’ (the first ‘Friends’ group) was formed to defend the gardens.Thankfully that proposal was dropped.

Ron Holt
Thanks to Ron Holt for the following: 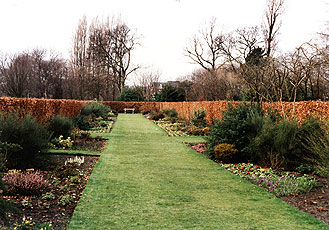 (Above) An early photo shows the depth of the borders. There was no pointing plan for the double borders, left over plants from the glasshouses were put in as they became available. Ron Holt, the gardener who took this photo used to get in trouble for spending too long in the gardens and too little time in the glasshouses! 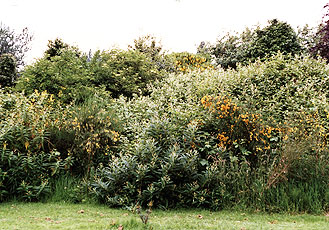 (Above) Overgrown Buddleia Globusa conceals a huge pile of stone from Brooklands Cemetary. The dovecote now stands here and the stone has been used to make walls and path edging. 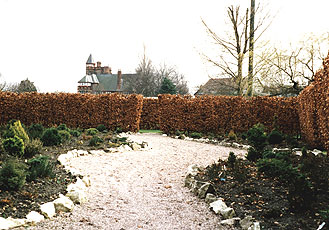 (Above) The conifer garden laid out 30 years ago. 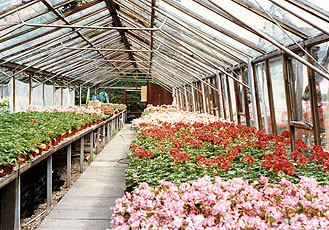 (Above) One of hte glasshouses. Plants were propagated here for use all over Sale and Altrincham. This area is now the Field of Hope. 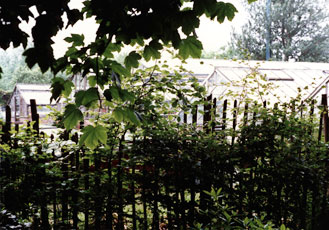 Sale Old Hall Dovecote
The exact date of its erection is not known, but it is generally accepted to be circa 1840 and was built in the grunds of Sale Old Hall, which was demolished in 1920. 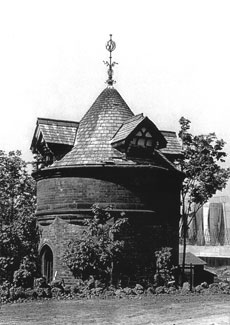 Throughout 1972, with the impending construction of the M63 motorway, there was much debate and correspondence as to the future of the Dovecote, between the then Sale Urban Council, the North Western Road Construction Unit, the Borough Engineer and the Parks and Cemetery Committee.

Suggestions for its re-erection on another site were made, such as Priory Woods, but were rejected. Demolition seemed imminent.

Sale Civic Society had been very much involved throughout, in discussion and effort, to save the building and at the 13th hour, literally days before the demolition date, sent an urgent telegram to the Minister for the Environment, halting the proceedings – for the Dovecote to achieve Grade II listed status in 1975.

Though protected from Motorway traffic vibration, by being partially submerged and filled with supportive concrete, the building was repeatedly much vandalised, graffiti-sprayed, with lead and slates stolen from the roof. Repair work, often urged by Sale Civic Society was continual and in 1984 consideration was made towards moving the building – to Walkden Gardens. This idea failed because of the cost.

The widening of the motorway (M60) resulted in this suggestion being made positive. In Spring 2003, the structure was carefully dismantled, each element of the building being given an identifying number and carefully stored until time for its reconstruction. A Rochdale Civil Engineer Contractor was employed.

November 2003 saw the commencement of the reconstruction in the chosen site within the gardens – one that would display the building at its best, in terms of appearance, access, landscaping and possible future use. 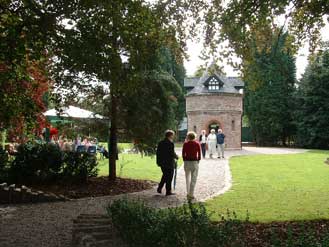 September 2004 saw the official ‘Opening Day’ – declared by the Mayor, Cllr. Pam Dixon and attended by all who had been involved in the saving and rebuild.

Since then the Dovecote has been used as a focal point for Friends of Walkden Gardens events, Arts events and further ‘Open Days’ in conjunction with the Civic Trust annual ‘Heritage Open Day’, organised by Sale Civic Society and the Friends. 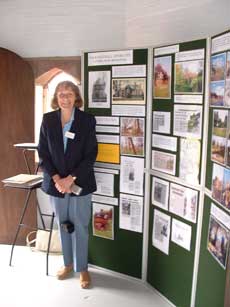 The reconstructed building is the successful result of high quality team-work between the Highways Agency, numerous Trafford MBC Service Departments – Buildings and Structure, Environmental Development, Conservation and Parks and Countryside. The Friends of Walkden Gardens have had tremendous input towards the design of the Dovecote’s surrounding landscape, to beautifully enhance the site of the building.